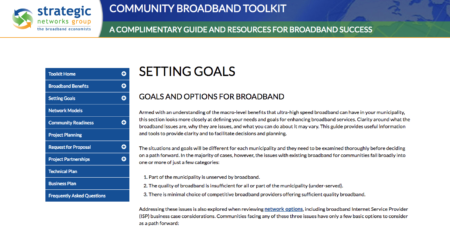 SNG’s Community Broadband Toolkit is designed to help communities establish, or improve broadband networks and services for the benefit of their users and their municipality as a whole. It builds upon previous research studies and takes lesson learned from municipal broadband projects conducted across North America.

Consisting of a set of guides, templates and tools, the Community Broadband Toolkit 2.0 expands on our original toolkit developed in 2008. While many of the original elements have been retained and updated, there is now a strategic focus on how broadband investments can be an economic enabler for your municipality. Toolkit 2.0 also expands the range of potential solutions for addressing broadband needs, recognizing that municipalities – large and small – are faced with a variety of different circumstances.

In cooperation with SNG, COS Systems is offering a trial to run of COS Service Zones campaign.

COS Service Zones is a broadband demand aggregation platform developed by fiber experts COS Systems. It is used to initially let residents take an online survey showing if and where they want better broadband service and can later be used to split the targeted area into smaller neighborhood zones (Fiberhoods), set take-rate targets and then let the people sign up to services and rally their neighbors to do the same. The platform allows the most eager fans to become champions of the project and integrates to social media platforms to ease spreading the word about the effort. When take-rate targets are reached it shows in which areas the network, if built, will generate revenue to justify a build-out.

The platform has been used across the USA and globally since 2014 and tens of thousands of people have shown their interest in better broadband through the built in survey and thousands have signed up to be Fiber Champions, willing to make an extra effort to help bring better broadband to their city and neighborhood.

This is a link to the site where COS Systems would add your area to start aggregating broadband demand in your community.