With a lack of adequate broadband service, Wilson headed to Austin in 2014 to find some answers at the Broadband Communities Summit.

One session he attended featured SNG’s Michael Curri who explained that: 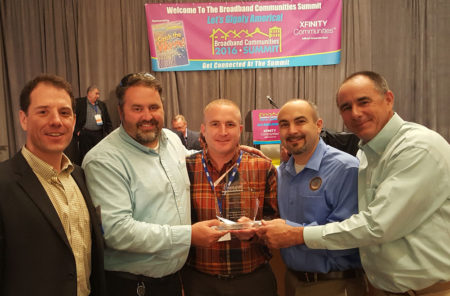 Armed with this and more data, Wilson took a case to the country board of commissioners that investment in better broadband infrastructure was imperative.

“The economic development piece of our pitch was what convinced the board,” explained Wilson. “The name of the game in a rural county is how can we increase the economy and drive economic development. Investment became less about downloading movies faster and focused on economic advancement.”

The board unanimously approved a $1.5 million investment in a cash-strapped county AFTER a final budget had ben approved months earlier. Leveraging e-rate dollars brought a $20 million dollar fiber investment to Walton, an accomplishment that was heralded by both sides of the political aisle.

With the build underway, Walton County was recognized two years later at the same Broadband Communities Summit with the Cornerstone Award for the significant community advancements brought about by the current fiber build.