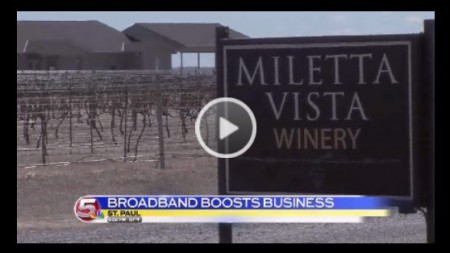 Nebraska Businesses Say Broadband is Key to Growth and Success

(Lincoln, Neb.) Lt. Gov. Lavon Heidemann today announced that Nebraska businesses no longer see broadband Internet service as a luxury, but as a key to economic success and future growth, according to a report prepared for the Nebraska Broadband Initiative.

“Nebraska entrepreneurs long have had a reputation for creativity and innovation, so it doesn’t surprise me that they have embraced broadband Internet service as a way to grow their businesses, not just locally but in many cases globally,” said Lt. Gov. Heidemann.

A survey was sent last fall to 10,000 businesses, and results are based on 1,124 responses. Lt. Gov. Heidemann, chairman of the Nebraska Information Technology Commission, explained the state was seeking feedback from businesses on use of Internet technology so that it can identify areas for improvement.

There are two key findings in the survey that address job and revenue growth:

The survey also shows that broadband use increases with employment size. The two business areas with the lowest current use – service delivery and rich media content – have the highest level of planned use in the future.

“Nebraska businesses see high-speed Internet as more than a way to do business,” said Lt. Gov. Heidemann, “they also see it as a way to present themselves to the world as on top of technology, a way to improve internal operations, and a way to help create jobs. This report offers a window into how Nebraska businesses use broadband and what they value from high-speed connectivity.”

Additionally, the findings show that businesses believe access to and effective use of the Internet has become an essential element in the survival and success of businesses in today’s economy. Businesses see broadband as a crucial way to connect with consumers and suppliers. With greater confidence in network security and privacy, the findings also suggest that businesses would do more with broadband.

Use of broadband services is very high across all types and locations of businesses. Nearly all responding businesses have broadband access, with cable (29%), DSL (24%) and fiber (19%) as the predominant technologies, but approximately a quarter still lack broadband-level connections in at least one direction. The speed and quality of a business’s Internet connection strongly impacts its use of the Internet.

Up to 500 businesses that responded to the survey will receive a personalized scorecard and the opportunity to work with a business broadband coach. The scorecards will include ideas on how to better utilize broadband technologies and the expected return on investment.

The complete report is available at broadband.nebraska.gov/.

Thursday, March 20th, 2014 Posted in: All SNG Insights Topics, SNG in the News