Broadband Stimulus… No, Not THAT Stimulus… in Europe

In 2009, the European Commission found that:
Broadband is of strategic importance because of its ability to accelerate the contribution of information and communication technologies to growth and innovation in all sectors of the economy and to social and territorial cohesion. 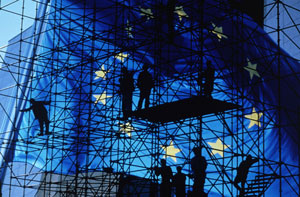 Nearly two years and hundreds of million dollars later in US Stimulus funding – not to mention the NBN in Australia –  what have the Europeans been doing?  The answer is establishing stimulus packages which have a European twist.

Back in that same year of 2009, realizing that communication providers were not going to be able to fund broadband networks that would reach all 495 million inhabitants spread over 27 countries, the European Union Commission placed a little more 1 billion Euros into the European Agricultural Fund for Rural Development (EAFRD). Concurrently, the Commission publicly encouraged member states to support broadband developments as a key enabler for economic growth and rural sustainability.

Here is where the catch comes… there is always a catch, right?  The Commission also had (and continues to have) a keen interest in seeing market competition as a force to maximize the economic welfare of its citizens. The question the Commission wrestles with  is whether subsidies made to one player in a market are likely to have a negative  effect on competition for the provision of services in that market, which would be to the detriment of those same citizens.

The conundrum was clear.

The solution lay in a series of guidelines under the snappy title of “Community Guidelines for the application of State aid rules in relation to rapid deployment of broadband networks.”  These set out a series of criteria that any publicly supported roll out of broadband, that is any stimulus package, must meet before public funds can be used.

The guidelines require the member state of the European Union to demonstrate that:

(a) the use of public funds will result in a higher level of broadband coverage and penetration, or at a faster rate, than would occur without that aid, and
(b) that the positive effects of this aid outweigh its negative effects in terms of distortion of competition

In January 2011 the Commission announced that it has approved a record amount of public aid for broadband development in, among others areas, Catalonia, Finland and Bavaria. This involved the use of over €1.8 billion of public funds for broadband development to support economic recovery, inclusive growth and the long term competitiveness of the EU and will potentially generate up to €3.5 billion of investments in the sector. Of those projects Germany accounted for 6, Italy 4, the UK, 3, Spain 3, while Sweden, Finland, Austria and Estonia each had one.

Approved State aid for broadband per year in the EU 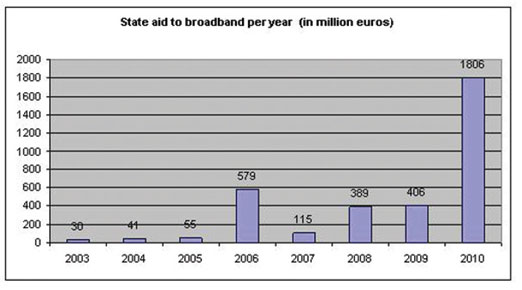 Commission Vice-President in charge of competition policy Joaquín Almunia commented: “Smart investments into high and very high speed broadband infrastructures are crucial to create jobs, increase economic performance and to unlock the competitive potential of the EU in the long term. The Commission is committed to help EU countries to accelerate private and public investments in this sector.”

So – in a rather different manner – Europeans get their own version of broadband stimulus.