by Doug Adams
As a marketer, Steve Jobs has always been on my short list of ‘most admired.’ His ability to innovate and wrap his products in the flag of an Apple culture was (and is) remarkable. My wife, the traditional Apple zealot explained what his leaving meant… she said simply, that Apple will “never be the same” – that what’s missing is the ‘magic touch’ that made Jobs legendary.

What Jobs was able to do was tie technology to meaning… to, as Don Draper quips in the famous Mad Men scene… take technology from a “glittering lure” and, on rare occasion, “engage the public beyond flash, if they have a sentimental bond with the product.” For those interested in the clip, view it on You Tube.

Jobs drove e-Solutions with his vision, innovation, and design… but mostly by convincing consumers that to Think Different was special.

He used the Apple culture (or the cult of Apple depending on your view) to engage and drive e-solution adoption. By making his products easy-to-use, he went beyond mere adoption and achieved utilization. The type of deep, involved utilization that made upgrades a must have, not just a nice to have.

It was Jobs vision that the broadband would make the computer the ‘digital hub’ of the home that drove electronics and accompanying applications at a dizzying rate, transforming an industry and a world of users. Without broadband, it is at least possible that Apple does not exist today. Instead, it’s the most valuable consumer brand in the world.

So now Apple now has a void. But more significantly for our purpose is the question… how do we, as broadband evangelists… do what he did?

I tend to cringe when I hear broadband described as a ‘utility.’ While that might be an accurate description, would anyone trying to drive exciting, transformative e-solutions describe the road there as a ‘utility?’ Does our economy’s future depend on a ‘utility?’

The simple answer is yes – electricity is a utility, one for which we depend mightily. But its existance does not inspire. We need to engage and inspire in 2011 when driving broadband use because it is not ingrained in our society to the depths that ‘traditional’ utilities are.

What we need are solutions that transform our world, build on a platform for innovation. We need to be as vigorous in selling broadband’s benefits as Jobs would with the latest iSomething.

Broadband has the ability to radically change our entire world in orders of magnitude more than it already has. But we need to get past the utilitarian view of broadband – looking at what it enables and instead what it empowers. At the advent of broadband, Apple’s campaign challenged us to push the world forward. Is what we’re doing enough to drive the complete transformative power of broadband… or do we need to Think Different?

If you haven’t moved for a job, you know someone who has. More than a decade into our broadband revolution, the knowledge economy, and e-everything, it’s a bit discouraging to find that, even today, geography can still dictate individual or organizational potential for success. Still, in 2011, the digital divide limits job and opportunities, either at an organizational or an individual/entrepreneurial level, in rural areas.

The Internet Innovation Alliance (IIA) ( www.internetinnovation.org/) released its 10 ways broadband contributes to job creation and serves as a connector of job seekers, employers and employees. Sources for the research include the American Library Association, the Federal Communications Commission, and SNG. 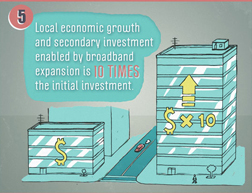 In the spirit of lists, we’ve come up with our own for this month’s issue of Bandwidth. Using SNG’s Digital Economy Analytics Platform (DEAP), containing data from regions across the U.S. and the globe, we present the… 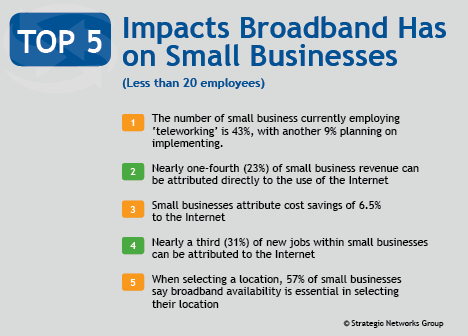 New Dimensions to the Digital Divide

by Derek Murphy & Michael Curri
The digital divide has long been commonly understood to mean unequal access to the Internet and its accompanying resources and services.

At SNG, utilization is a key metric we examine in all regions. In the past year, SNG collected utilization data in four states from over 12,534 organizations (commercial and non-commercial) and 4,638 households giving us unique insights into this new dimension to the digital divide. Some findings are not surprising while some provide new and unique insights that cause us to take a step back and wonder how we – as an industry – should define the digital divide moving forward.

The Big Picture:
Not surprisingly, SNG’s research shows that age and income have very significant impacts on how people use the Internet. Our proprietary Digital Economy index (DEi) summarizes how households use thirty distinct Internet activities. The higher the DEi, the more Internet activities a household engages. The Digital Economy index progression from 1 to 10 (10 being highest) reflects the number of e-solutions being utilized – 10 being a household at 100% utlization.

Utilization is impacted by income and age – the lower a household income or the older the household, the lower its Internet utilization. The differences (or divide) is most pronounced for those over 55 and those making less than $30,000. So the digital divide is actually expanding as younger, higher income households best leverage e-solutions.

Without a ‘Next Step,’ It’s Just Numbers
SNG’s research (above) clearly shows:

So lower income individuals ages 55-plus land at the lowest level of utilization. Conversely, younger and upper income households are at a higher level of utilization, leveraging broadband more effectively and deriving the most benefits – further increasing the digital divide.

Simply connecting… or even basic adoption does not complete the process of bringing people and households into the digital world. Even among those who are already using the Internet, there is a digital divide.

So we need to do better, including designing Internet outreach and training programs to the groups that are still experiencing the divide. How will the older generation be able to use Telehealth if they can barely accomplish basic Internet activities?

Digging deeper, for those interested in the details!
Where, specifically, are household struggling to adopt Internet activities? Our studies show that some skills and activities are easier to learn than others – the table below shows the activities where there is still a divide. E-mail, browsing and research are actively used by 80% or more of households. However, teleworking, selling online and using VOIP are significantly more challenging – but that’s where the biggest benefits from utilization are derived. 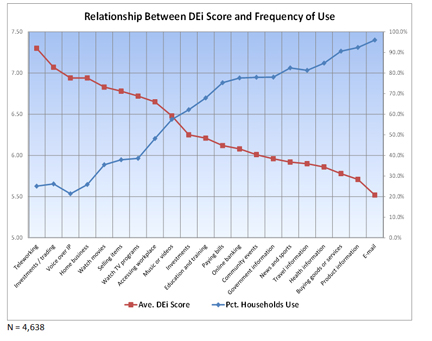 The earning ability of lower and middle income households is enhanced by the very Internet activities for which they’re least skilled. Economic development investments by government or nonprofits should focus on helping drive the utilization of e-solutions that generate the most benefits for inviduals. A starting point might be more focused, targeted training for those e-solutions that have the most significant, long-lasting socio-economic impacts.